A childhood among the tea trees


When I was young, my grandfather passed away early, my grandmother was very ill, hence it was often my parents who would go pick tea in the mountains. When my parents had back pain or had to climb the tea trees, they would put me in a bag on the ground and let me play, when I was sleepy, I would even take a nap in it ! But since I was very curious, the bag was often useless, I would often jump out of it and play on the ground, I would quickly be covered with mud. Of course, I was very young and it's hard for me to remember, it's mostly what my parents told me when I was older. I can remember from the time I went to primary school, I recall many stories about picking tea in the hills with my parents, after class.


Because the tea mountain was quite far from home, we had to prepare well before going there: a small machete (once arrived in the tea garden, my parents would first clear the ground from weeds around the tea trees, that way it would be more convenient to harvest tea, then, they would chase away any snake lying there and finally, give a bit of green manure to the tea trees), a small cloth bag that would allow you to climb tall trees and preserve the fresh leaves, a bamboo basket that you'd keep on the ground to put the fresh leaves, plastic bottles (once you drank it, you could refill them in the many small ponds nearby the tea gardens), a box meal (it's very simple, just rice and pickles). I remember that I ate so much rice and pickles, drank so much water, that after an hour, I would often have a stomachache! I took an umbrella but when the rain was too strong, it was useless, and my parents would tie up a tarp between the tea trees to protect me. My parents couldn't pick leaves with an umbrella in the hand, hence they covered themselves with a plastic film. The mountain weather changes a lot, when it's raining, the temperature can decrease very quickly, if you're picking tea when it's raining, it's common that your hands get numb because of the cold, therefore when it was raining, my parents wouldn't let me play in the tea trees, I would quietly sit on a rock and wait for a better weather. The countryside life is full of hardship, but as the years passed, I forgot them, most of what I recall is my children funny stories.


As a child, what I enjoyed to search for a tea tree easy and safe to climb, once I was up there, I would find a comfortable position to sit, hang up my cloth bag in the tree, regard it as my own small house, use all kind of flowers to decorate it. Sometimes I would pick tea flowers, tea fruits, capture a cicada. Sometimes, I would quietly watch how a caterpillar is eating a tea leaf, how a spider can trap insects weaving its net, sometimes, I would tease a mantis with a tea leaf, watch in which direction its antennas are pointing, when I was playing with mantis, you could often read on my lips :'mantis!mantis! Where is you daddy? Where is your mummy?' That's because I often heard the elders say the mantis' antenna always point towards its parents; I have never found the parents, but when I came across a mantis, I couldn't help extending the hand and teasing it! Sometimes I would listen to the birds singing, watching carefully where this bird would fly, holding an insect in his mouth. And watching it again on his fly back, revealing his nest. Then we would climb the tree and take the youths and the bird's eggs, it really requires cunning wits! We could be bitten by a sort of yellow caterpillar (here, we call it Ladingzi), it burns the hand and you cry very hard, as our parents shared their experience, they taught us that if you're bitten by such an animal, you just need to spread saliva on the wounds, you can also crush the animal and use the liquid inside its body (my parents often say this is an example of using evil against evil), this method works much better than using saliva but it's not always easy to find the animal that bit you! I also liked to climb the tallest tea trees to the top, then, I would shake the branches, that would blow wind and make me feel like on a swing and you could hear the rustle of the tea leaves. 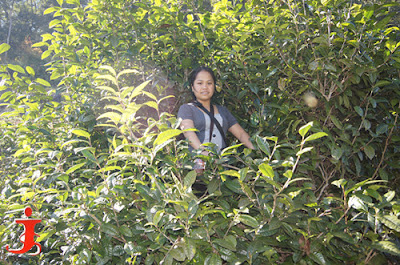