The legend says one day, two Dai hunters saw a golden deer in the forest. They followed his tracks for several days, and finally, they discovered a beautiful place. Everything was green , the landscape was made of small mountains, rivers and waterfalls. The Dai people settled in this little paradise, they sculpted the mountain with their sweat, built terraces on the steep hills and called this kingdom ''Sipsongbanna'':the land of 12000 rice fields.


Originally, the entire Xishuangbanna was covered by dense forests, tropical primary forests. Traditionally, the hill tribes used slash and burn agriculture to produce food. This method consists in cutting a piece of forest, burning the vegetation to bring nutrients to the soil, and use that rich soil to grow cereals, fruits and vegetables. On the first year, this method gives very good yield, then, as time goes on, the nutrients get depleted, and the output gradually decreases. When the soil is too poor, the farmers find another piece of land and start the process again: slashing, burning, cultivation and moving away. In the past, Xishuangbanna's tropical climate would allow the vegetation to grow back fast enough so that after ten years, the land could be used again. This very ancient technique of agriculture has worked very well as long as the population density was low.

Another way to grow rice is to use paddy fields. This method is more efficient than slash and burn agriculture but it requires a very flat ground. Unlike standard fields, paddies do not need to go under a fallow period to recover, however, water must be delivered permanently with a good irrigation system, it is very important in order to achieve high yield..

Slash and burn and paddy fields are the two main ways in which people grow food in Xishuangbanna, yet, the farmers of this beautiful county have many long-term plantations: mostly banana, rubber and tea plantations. This kind of agriculture has a different purpose: it must bring a cash revenue to the farmer, that's the main way farmers use to make money, the other crops are only for subsistence. Hevea plantations is the most important cash crop in Xishuangbanna. The farmers get a good profit out of the rubber extracted. The surface area used for Hevea cultivation is expanding very fast.

In 15 years (from 1988 to 2003), the average income per person has tripled in Xishuangbanna. This development has been faster than the average in China and still is (in 2010 Xishuangbanna had 12% growth while China averaged 9%). This economic success is due to the diversity of activities in the region: agriculture (rubber, tea, fruits), industry (mining, logging) and services (tourism, retail).

The tourists come to Xishuangbanna to enjoy its preserved nature, beautiful landscapes, mysterious forests and rich biodiversity. They are like the two Dai hunters following the golden deer. Tourism accounts for 16.5% of Xishuangbanna's GDP. Meanwhile, the huge plantations of rubber trees damage the natural landscape, usually made of jungle and paddy fields.


First, the soil cover is different in a hevea plantation and in a tropical forest. The tropical forest has a thick canopy, inside the forest is dark, even by day. When a rainfall occurs, part of the rainwater is captured by the canopy, the thick layer of leaves acts as a buffer and the rainwater continues to fall on the ground long after the rain has stopped. In a rubber tree plantation, the canopy is much lighter, the ground is more exposed, and when the rain falls, it strikes the ground directly and quickly flows down the slopes. During the rainy season, water mostly falls in the form of short and intense showers. When the soil becomes saturated, the excessive water is not held on the ground and flows down, it is called the surface runoff. Each kind of terrain has a different capacity to hold water or let it flow down and therefore create surface runoff. Here are a few reasons why this capacity to absorb water it is an important point in terms of land management:


-Excessive surface runoff can dramatically increase the water level of a river, it increases the risk of floods during severe rainstorms.

-Water has an important role for the soil: it distributes the nutrients. When the rainwater runs down the slope, it takes some of those nutrients with it. It creates two problems: the soil on which rain falls loses nutrients which are important for plant growth; and the nutrient-rich water eventually pollutes lakes, rivers and even seas, which create a risk of algal blooms and biodiversity loss (a big issues in the Baltic sea and the Gulf of Thailand).

Second, tropical forest intercepts fog (it means it ''creates'' fog), hevea plantations do not. Fog is important during the dry season because it brings water to the plants. As a result of the massive development of rubber plantations, there is much less foggy days in Xishuangbanna, its misty atmosphere has vanished. This is probably the most noticeable effect on the local climate, people are very concerned about it. It might have implications on tourism and biodiversity.

Third, the tropical forest is an important habitat for wildlife, it hosts many more species than rubber plantations do. Xishuangbanna is at the border between temperate climate (like in northern Yunnan) and tropical climate (like in Thailand). As a consequence, it has a particularly rich biodiversity and is the home of many rare species, including over 150 unique species. In total, 5000 plants and 1000 animal species ave been observed in Xishuangbanna, and many of them rely on the tropical forest to survive.

Even though Nature is priceless, ecosystems can be given a value, which is representative of the benefits they bring to our society, or in other words, the effort we would have to deploy if they were not here. Each type of environment can be attributed a value in dollars per hectare per year. The ecosystem of one hectare of tropical forest gives a service to mankin estomated to $2007/year, while in a rubber tree plantation, the ecosystem is only ''worth'' $92/year. In 1988, the total amount of ecosystem service in Xishuangbanna was worth 2474 million dollars while in 2003, it was estimated to 2084 million dollars (inflation adjusted), a decrease by 16%.

Moreover, the ever expanding hevea plantations take on the land traditionnaly used for slash and burn agriculture, as a consequence, the farmers must rely mainly the paddy fields to produce their food. Slash and burn agriculture allows the farmers to cultivate a wide range of vegetables and rice varieties. The paddy field cultivation is less diverse and is more dependent on water and fertilizers. This is a big change for farmers because they are leaving the traditional methods which were complex and required a lot of knowledge about soil, varietials and Nature in general. Instead, they choose more simple and efficient methods which have been satisfying so far but might not be sustainable. Now, the farmers cultivate only a few species and earn money with rubber, and they buy vegetables at the market. This new way of living makes them more dependent on the price of rubber and on the weather. What would happen in case a very poor harvest on their unique cash crops? The traditional agriculture involved dozens of species and having bad yields due to pest on one crop had no serious consequences. In terms of agriculture, diversity provides the farmer food security. 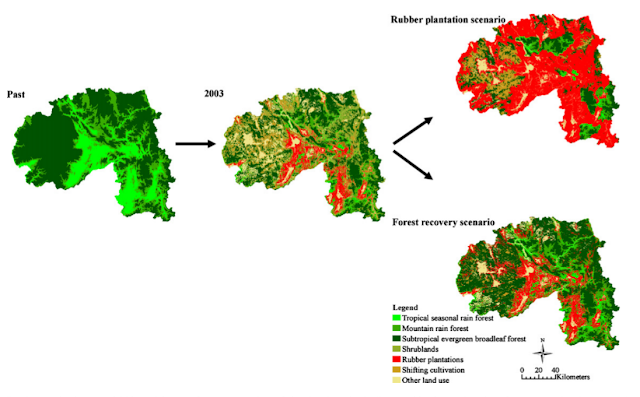 The picture on the left represents Xishuangbanna as it was thousands of years ago: only tropical and mountain rain forest. The central map is a model of the land use in 2003, as you can see, rubber tree plantations have taken over the south of Xishuangbanna, the western areas are mostly planted with tea gardens. Scientists have assessed the consequences of two scenarios: the ''rubber plantation scenario'' takes the hypothesis that no regulation is made and that the price of rubber stays high. The hevea plantations would expand up to 1500m high, only the established natural reserves and the tea gardens are preserved. In the second scenario, the government would take measures to control and restrain the rubber industry, and start forest conservation projects. In this case, the area occupied by rubber trees would be roughly the same as it was in 2003 and many other plantations and fields would be converted into tropical forest.

The expansion of hevea plantations in Xishuangbanna surely have a positive short term economic impact because the demand for natural rubber is high. On the long term though, the trend is uncertain, what would be the impact of the landscape change on tourism? How about the retail industry? The tea industry? Wood carving? Jade trade and jewelery? If the tourists don't come to Xishuangbanna because of the damaged environment, the economic improvement made on the rubber might well be offset by the negative impacts on other sectors.


Why is Xishuangbanna tea more expensive than Lincang tea? Probably because Xishuangbanna has prestige, it is a very famous region all across China, a borderland, full of Pu Er tea, elephants, tropical forest; the land of Dai people, a haven of South East Asia, not the land of rubber trees. Xishuangbanna is a 'place to go' in Yunnan, just like Dali and Lijiang. Especially in those areas, which already enjoy a good reputation, it is important to protect environment and culture, to invest in natural capital and to give this gem the setting it deserves.

A research program assessed that in the area around Menglun (a typical town in central Banna), the economic development has been achieved at the expense of ecosystem services.

In this area, for 1$/y GDP earned, 2$/y of ecosystem services have been lost. Can we consider this development sustainable? The answer is not that easy because the model used has its limitations. To a certain extent, the value attributed to ecosystem services is variable, how would you value the aesthetic service given by a tropical forest? How much is worth a walk in the forest, the bird's song, butterflies flying around you, is it possible to put a price on such things? Ecosystem service value includes the extra spending if this forest was not here. In a poor environment, people fall sick more often because of polluted air/water, poor soils makes yields lower, implies the buying of agrochemicals to prevent pests and diseases and give extra work to the farmers. Dozens of parameters are included in the calculation of this ecosystem service value, this kind of assessment is relatively new, and like all branches of environmental science and there is room for improvement.


Meanwhile, decisions must be taken, policies must be established, the precautionary principle suggests that people start to act without waiting for complete scientific knowledge. We might never be able to estimate what will happen...until it happens. But what is sure is that changes in the climate of Xishuangbanna are observed and they are faster than those expected due to global warming. Scientists believe that in this place, at the limit of two types of climate, the forest creates and sustains its own micro-climate, if it is destroyed, the climate will be dramatically affected. Present actions dictate the future, humans must take the right decisions now to achieve a more developed world, this is the key of sustainable development.